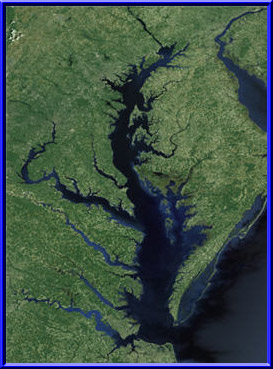 The Chesapeake Bay was formed some 35 million years ago, when a comet impacted the earth 130 miles southeast of what is today Washington, D.C. Geologists call this site the "Exmore Crater". Many millions of years later, a river that would become the Susquehanna River, formed and flowed downhill toward the Atlantic Ocean through the 55 mile-wide crater. Around 9000 B.C., melting glaciers began to fill the Susquehanna valley, and about 2000 B.C., the Chesapeake Bay was formed.

The Chesapeake Bay is the largest of 130 estuaries in the United States. It is about 200 miles long, stretching from Havre de Grace, Maryland to Norfolk, Virginia. The Bay's width ranges from 3.4 miles near Aberdeen, Maryland to 35 miles near the mouth of the Potomac River. The surface area of the Bay and its tidal tributaries is around 7,000 square miles. There are over 4,000 miles of navigable shoreline. That increases to around 11,684 miles of shoreline (more than the entire West Coast) when you include the Bay's tidal tributaries. There are about 150 major rivers and streams that drain into the Chesapeake from a watershed that includes six states (Delaware, Maryland, New York, Pennsylvania, Virginia, and West Virginia) and the District of Columbia.

The Chesapeake Bay is shaped like a shallow tray and is surprisingly thin. Its average depth is about 21 feet with a few deep spots that reach 174 feet in depth. A sailor has to be careful when trying to find a "gunkhole", an anchorage in the shallow coves, rivers and streams that are located around the Bay. This gives rise to the saying "There are two types of sailors on the Bay - those that have run aground and those that will." But with the Bay's mostly sandy and muddy bottom, running aground is more of an inconvenient, albeit embarrassing, situation than it is a disaster.